Just got back from the National Religious Broadcasters Convention in Nashville. As always this was an incredible event and it is my recommendation for anyone in religious media. This year was somewhat different than the last with an increased emphasis on social media. It seemed as if one entire day was dominated with meetings hosted by Facebook, Google, or Twitter employees. There was even a break-out session devoted on making your YouTube video go viral. With the number of people utilizing social media on the increase, this was a welcome source of information on connecting others to your organization. Tuesday presented a good selection of information on the problems facing the religious community in the areas of religious freedom and its future. Anyone taking advantage of those sessions were given real facts about the troubled times we live in. 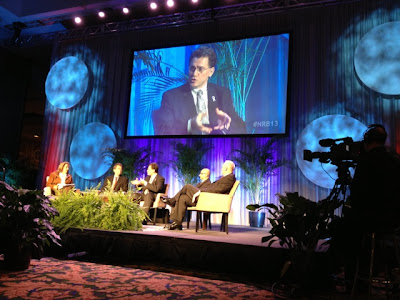 The expo is always a great place to learn about new technology and make connections to other ministries. This year was a little different than before. There seemed to be less technology for church media than the past. For example, last year there was an area devoted to staging, lighting, and sound. This year that did not exist. There was, however, more broadcast media technology than before. You can't hold NRB at fault for that because floor space is purchased by the vendor rather than the conference.

If you have never been to the NRB, plan on making the trek to Nashville next year. It is full of valuable information that can help your organization grow.
Posted by Doug at 12:19 PM

I welcome actual relevant comments to this blog. Comments meant to SPAM etc will be removed immediately.